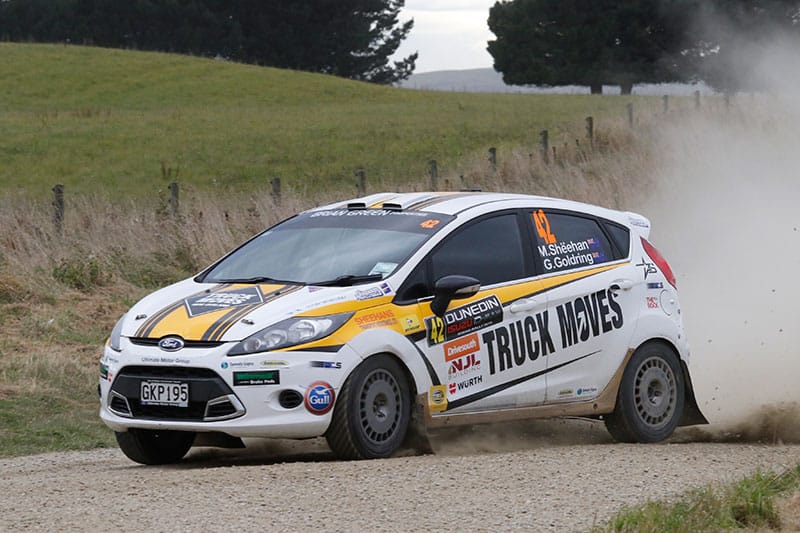 Mike Sheehan won his class in his Fiesta at the Otago Rally. Photo: Peter Whitten

Queenstown’s Mike Sheehan has achieved a life long dream of winning his class in the Brian Green Property Group New Zealand Rally Championship at the opening round, Rally Otago, held over the weekend.

Sheehan and co-driver Glenn Goldring headed to the event expecting a strong battle with Robbie and Amy Stokes who run a car identical in specification to Sheehan’s Truck Moves Ford Fiesta R2.

With plenty of rain in the build up to the event, the opening stage offered a slippery wake up call for all teams, including his rival. Seeing his rival off the road, Sheehan took the opportunity to back off in a car that wasn’t handling to his liking.

The hard working crew of Paul, Logan, Matt and Barry were able to put the car right after special stage five and Sheehan was able to attack, although with competitors Stokes and Peter Jackson both out of the rally by stage seven, Sheehan faced little competition and would eventually lead home Chinese driver Haowen Chu by close to 38 minutes, as well as victory in the Mainland series class B over Nick Marston by 54 seconds.

The only scare for the team was on the final stage, when a nasty bump damaged the front bumper and broke the exhaust system, although Sheehan was quite proud to have the loudest car at the finish ceremony.

“We are wrapped to have secured 1 point less than maximum for the first round of the championship. Our goal was to take away solid points on this event as it holds a quarter of the points on offer for the championship, and thats exactly what we did. It makes the hard work and immense preparation for the opening round worth every minute”.

The whole Sheehans Motorsport team now turn their attention to preparing the car before they jump on the Interislander and head to the International Rally of Whangarei on May 3-5.