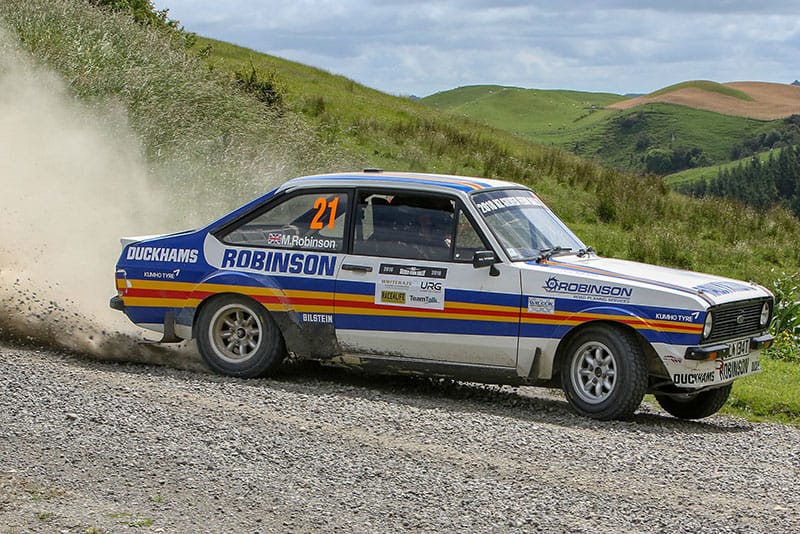 Back leading the Silver Fern Rally are Matthew Robinson and Sam Collis in their Ford Escort RS1800.

Day five of this year’s NZ Silver Fern Rally might have been the shortest in terms of special stages – three – and stage kilometres – just 84 – but it packed a serous punch.

For a start, overnight leader Roger Chilman and co-driver Max Freeman (Ford Escort RS1800) from Great Britain broke an axle in the first stage – the 38.81km Beaconsfield Valley Road  – and had to be towed out, handing their hard-won and very short-term lead back to compatriots Matthew Robinson and Sam Colllis in their Ford Escort RS 1800.

That was by no means the only bad news for the front-running group to come out of the stage either.

2016 Silver Fern Rally winner, and the top seed for the 2018 event, Meirion Evans and co-driver Lestyn Williams from Wales, hit a culvert in their Ford Escort, the sister car to Chilman’s,  putting the pair out for the remaining stages and placing a question mark against their ability to be back in the event tomorrow.

With teammates Chilman and Evans both out of contention early, it was left to one of the other visiting UK Ford Escort Mk2 drivers, Simon Tysoe and co-driver Paul Morris to step up and take the stage win.

With a new axle in his Escort though, Roger Chilman was not only back in the running after the first stage, he went on to win the other two from Tysoe and Morris, and Matthew Robinson and Sam Collis.

Rather than starting to drive conservatively to protect what at parc ferme back in Palmerston North this evening was a lead of over 10 minutes, however, Robinson said he was simply struggling as the first car on the road with the thickest gravel he reckoned he had ever seen in a rally, here or back home in the UK.

First Kiwis in the event pecking order after another quick clean day today were son Brad and father Stuart McFarlane in third place in their Porsche 911. Tysoe and Morris are looming closer and closer however, the margin the Kiwi pair enjoyed at the end of the day this evening just six seconds. 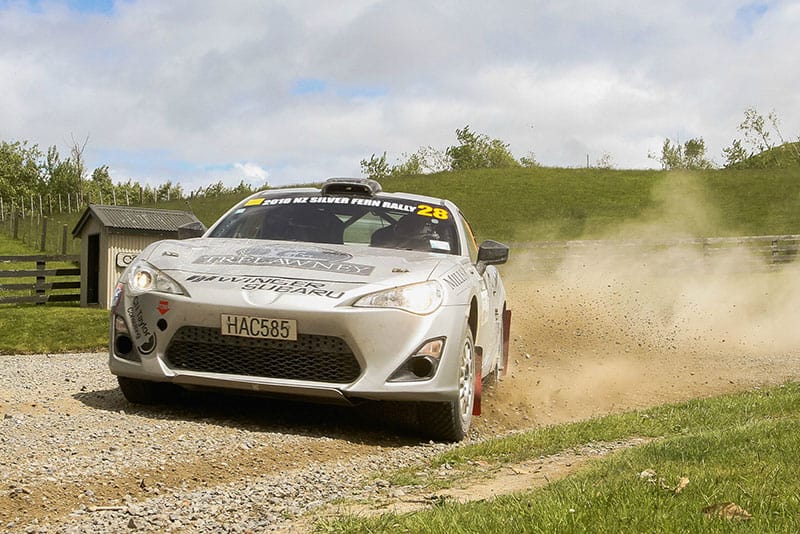 Closing in on the lead of the Challenge section are Brent Taylor and Dave Neill in Taylor’s Toyota GT86.

Fellow Kiwis Brent Rawstron and Ian McKee also remain a distinct threat to the McFarlane’s prospects of a podium, as the Rawstron/McKee Mk 2 Escort ended the day in fifth place but only another 14.5 seconds back from Tysoe and Morris.

Locals Brian Green and co-driver Fleur Pedersen were also forced to call it quits today with a blown motor in Green’s car.

Despite an early scare today when he clipped Meirion Evans’ prone Ford Escort in the fateful first stage the story of the Challenge category today was about how Brent Taylor and co-driver Dave Neill in Taylor’s contemporary Toyota GT86 were chipping away at the lead event rookies Mike Goldsbury and Dan Wallis have built up in their circa 1982 Toyota Corolla DX!

Tomorrow (Thursday Nov 30) sees the NZ Silver Fern Rally field back into a full day of stages (135 kms over six) between Ekatahuna in the west and parc ferme in Havelock North in the east.