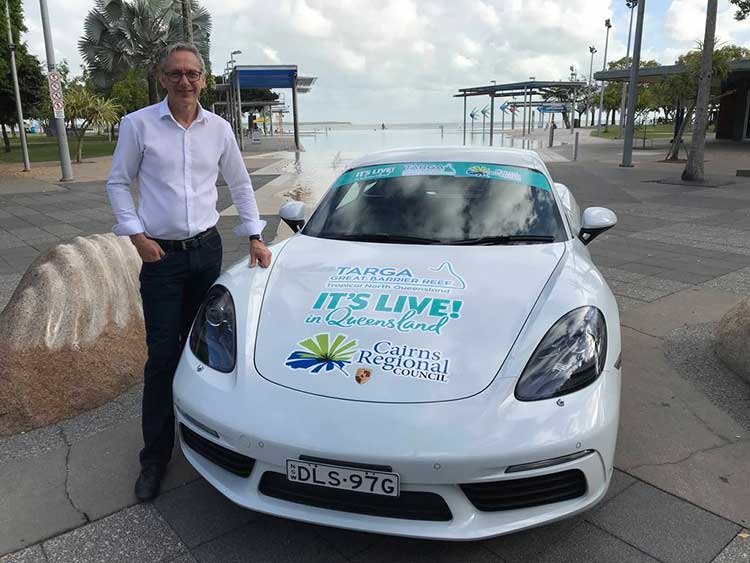 Set and ready for action on the magnificent roads around Tropical North Queensland. Targa Director Mark Perry in Cairns.

Tropical North Queensland will host a new major tourism event for the next three years with the launch of Targa Great Barrier Reef, a three-day car rally that will see the field of around 200 cars visit all key regions, including Port Douglas, Innisfail and the Atherton Tablelands.

The new event, to be based in Cairns from 31 August to 2 September next year, is modelled on the world’s largest tarmac rally, Targa Tasmania, which has been held annually on the Apple Isle since making its debut in 1992.

Targa Great Barrier Reef will be a round of the four event CAMS Australian Targa Championship, which also includes Targa North West, Targa Tasmania, and Targa High Country in Victoria.

The extension of the series into Queensland was made possible through a three-year funding deal by Tourism & Events Queensland and Cairns Regional Council with series organiser, Targa Australia.

The two hundred cars expected to take part in the 2018 event will represent a cavalcade of motoring history from pre-war classics right through to the latest exotic supercars.

The cars will tackle 15 stages across more than 200 competitive kilometres on a course that covers more than 800 kilometres across Tropical North Queensland.

The event will start and finish each day in Cairns, with a Super Street Stage on the Saturday night bringing the action right into the heart of the city. Cairns will also host Targafest, where the cars are on display for fans to see close up, while regional towns will host a lunch stop each day which will see various local charities supported.

Underlining the scale of the event is the fact that more than 500 local officials and various community groups will be involved in its successful running.

Targa Australia Director, Mark Perry, is excited with the expansion of the championship.
“The secret to the long-term success of Targa Tasmania is that it is a tourism destination event built around a passion for the motor vehicle,” Perry said.

“It attracts people and their cars from right around Australia, and overseas. It’s a format that sees the event travel to the fans, stopping at a number of towns along the way, meaning it’s not just one town or one city that is the winner and our `stadium’ covers thousands of square kilometres of iconic landscapes that will showcase the region to the world.

“Targa is renowned for showcasing and bringing awareness to many of Australia’s iconic and important World Heritage Areas through its TV Specials, broadcast around the world, and will continue to do so with Targa Great Barrier Reef in highlighting the beauty and importance of preserving the Tropical North Queensland region.”

“Targa Tasmania attracts some beautiful cars from across the eras, and I’m sure many of those competitors will be drawn to this new event and others will enter now they have an event closer to home, along with also tapping into the lucrative Asian market due to the ease of travelling to Cairns.”

“Being part of a national championship will ensure all the top cars and factory teams are present, and they boast some incredible automotive pedigree and some absolutely awesome drivers.”

“With the backdrop of the Great Barrier Reef, this race will be an attractive proposition to Targa teams around the world,” she said.

“To have such an iconic sporting experience so close to one of Queensland’s most important natural assets will create a wonderful experience for teams and racegoers.

“Events like this deliver a valuable boost to the Tropical North Queensland economy – helping to attract visitors and support local jobs.

“Targa Great Barrier Reef will not only be great for Cairns, but fantastic for our region,” Cr Manning said.

“This is an iconic car race which will be set against an iconic backdrop – it is the perfection combination. We have a reputation of facilitating world-class events, and this will be no different.”

“We are seeing increasing numbers of Asian competitors at events like Ironman Asia-Pacific and the Great Barrier Reef Marathon and this event will further appeal to these markets,” she said.

“With new flights from China in December added to our direct connections from Singapore and Japan we have the opportunity to further grow Tropical North Queensland as an international sports event destination.”