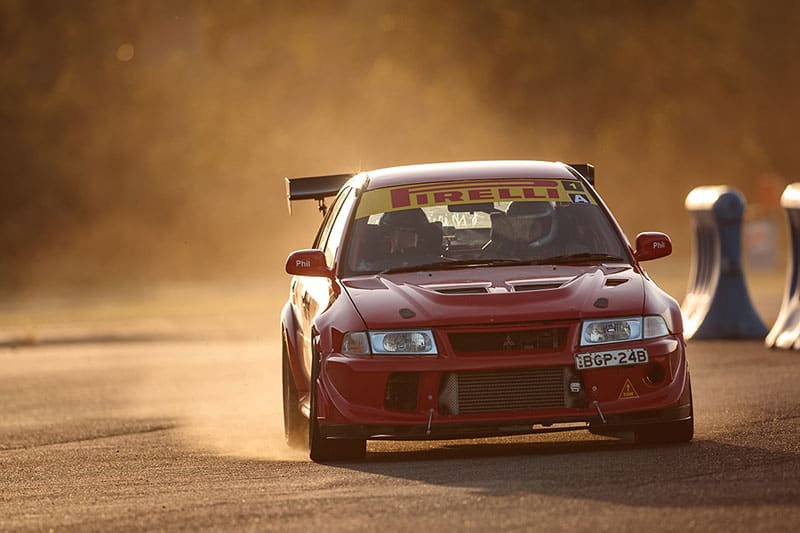 The first round of the 2019/2020 Whiteline Tarmac Rallysprint Series kicks off tonight at the Sydney International Dragway, and just like in previous seasons, it has attracted a quality field of 85 cars.

Entries have come from far and wide and include the typical line up of VW Golf GTis, Mitsubishi Lancer EVOs and Subaru WRXs. But there’s also some very special cars entered such as the WRC spec Toyota Corolla of Darryl Bush, Kevin Hinchcliffe’s Ford Cosworth Sierra and Mark Cain in a Ferrari 575M.

The favourites to win the event are Phil Heafey in a Mitsubishi Lancer and Michael Caine in a Mazda RX7, who are likely to battle for the top spot on the podium as they have done at previous events.

There are also a few other regulars likely to challenge for the win including Jake Lambie in another EVO Lancer and Michael Harding in a WRX STi, fresh from competing in the Tarmac Rally Championship.

NSSCC President Brett Middleton said: “We’re really looking forward to tonight. We started planning this season as soon as last season finished and this event is a product of the many volunteers who have dedicated themselves to ensuring its success.

“It’s also great to see such a big field and a variety of cars entered. I can’t wait for it to all get started tonight.”

The first round of the Summer series is also the first time the event has included a special programme specifically for Juniors.

The program, supported by Hyundai, will be a fantastic opportunity for young up and coming rally drivers to hone their skills under the watchful eye of an experienced rally driver.

Teams will start to arrive at the Dragway from 3pm and the action starts at 6pm. Spectating is free and the Dragway is located on Ferrers Road, Eastern Creek.

The 2019/2020 Summer Series of the Whiteline Tarmac Rallysprint is open to both experienced rally drivers through to novice and first-time competitors.

The event is 100% asphalt, conducted on private roads within Sydney Dragway precinct. The event is run as a special stage rally with cars starting at 30 second intervals.

To compete at the Whiteline Tarmac Rallysprint Series, entrants need to be over 14 years old. No drivers licence or vehicle rego is needed.