The Asia-Pacific Rally Championship (APRC) is in Australia this weekend for the International Rally of Queensland, where Team MRF drivers Gaurav Gill and Jan Kopecky resume their battle for supremacy.

With one win apiece from the first two rounds, in New Zealand and New Caledonia, Gill and Kopecky come into round three of the championship equal on points, with both needing a win to move into a clear lead.

Driving their Team MRF Skoda Fabia Super 2000s, their championship battle has, not surprisingly, been close. Both drivers are the class of the APRC field, with Gill the reigning title holder, and Kopecky last year’s FIA European Rally Champion. 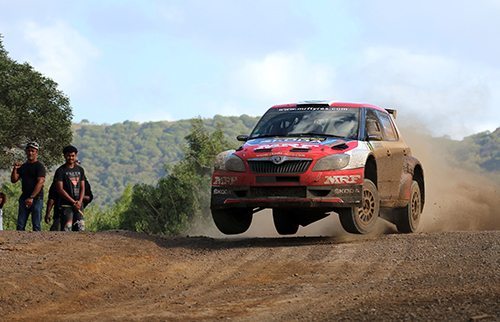 “While Gaurav has done the Rally of Queensland several times before, this will be Jan’s first time, however he has shown that he has the experience to win events first time out. So we’re expecting another really close battle this weekend.

“We’ve never implied team orders in the past, and we won’t be starting that this weekend. Both drivers will be itching to gain an advantage and will be going for the win. It should be exciting to watch!”

Despite being held on Queensland’s Sunshine Coast, based out of Caloundra, the weather is looking like being wet for the rally, which will make conditions even more tricky than normal.

Drivers have regularly stated that the forest roads around Imbil have very little grip, and if the forecast rain arrives, then conditions could be treacherous.

It was conditions similar to that which saw Gill’s car needing repair after an off-road excursion in New Caledonia that saw him drop from first to second place by the end of the event.

Since that rally, Gill has been busy, and last weekend won the Rally of Maharashtra, the first round of the Indian Rally Championship.

Both Gill and Kopecky will have a short test session on Wednesday morning, before the rally begins on Saturday.

The International Rally of Queensland will again be based in the Mary Valley, with the service park and event HQ located in Imbil, around two hours north of Brisbane. It is the sixth time the event has been a round of the APRC.

A revised itinerary has dramatically reduced the amount of liaison distance this year, with the majority of the stages being used twice, and two stages being run three times.

The rally is run over a total of 16 stages, over a mixture of fast flowing and sometimes twisty forestry roads. The longest stage of the rally is 35.72km in length.

After a ceremonial start in Caloundra on Friday night, the rally runs on Saturday and Sunday. The event is also round three of the Australian Rally Championship.