Thrilling Win for Hoy as Qld title hots up 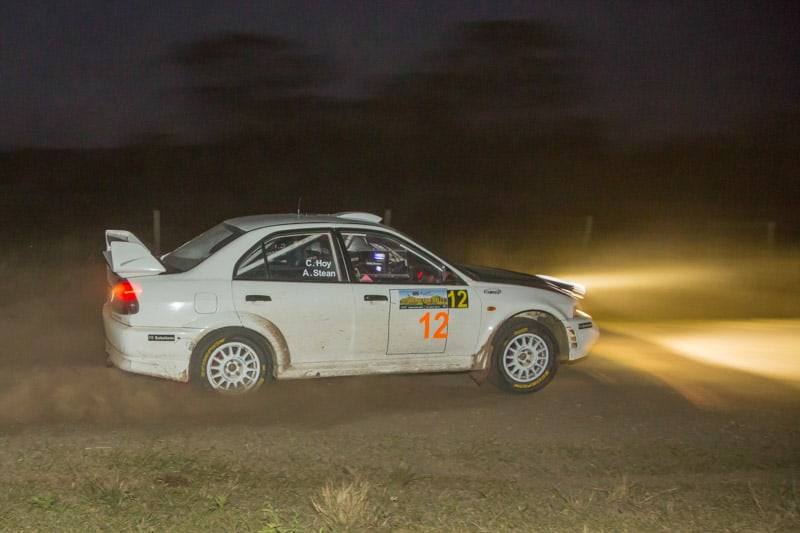 The P3 Solutions Qld Rally Championship has had three different winners in as many rounds with Clayton Hoy and Alan Stean victorious at the Accent Benchtops Working Dog Rally Bonalbo.

The talented young driver in a Mitsubishi Evo 6, at his first state championship event and second rally, made heads turn right from start.

Organisers quickly realised his speed wasn’t luck and moved his road position forward from his initial seeding of car 12.

The third round of the P3 Solutions Qld Rally Championship was also combined with the MTA NSW Rally Championship and the East Coast Classic Series providing a large field of 49 cars of highly competitive teams for the inaugural event .

The northern NSW township of Bonalbo embraced and accommodated the Accent Benchtops Working Dog Rally with open arms. The 110km of fast roads selected were all high quality shire roads with nights stages to add to the thrill.

Putting up a fight with Hoy/Stean was second placed Glen Brinkman and Harvey Smith (Mitsubishi Evo 9). The pair having a luckless season in Qld so far, reveled in the competition and the battle began. At the first regroup after 3 stages Hoy/Stean had the lead by 16s.

In the next loop the teams tied two out of the four stages with the gap drawing out to 22s. Once the sun had gone down it was time for the final two night stages.

With the advantage of Car 1 on the road Brinkman/Smith pushed hard with two stage wins, however could only reduced the gap to 11s.

The rally had many mini battles like the leaders all the way through the field. Finishing 3rd QRC and with massive grins were the Armidale pair of Garry Yeomans and Kam Baker (Mitsubishi Evo 6).

Yeomans/Baker held off young guns Brayden Wilson and Blake Wilson (Mitsubishi Evo 9) who placed 4th. The boys also taking out first in the juniors. With only 3s behind the Wilson brothers it was a tie for 5th. 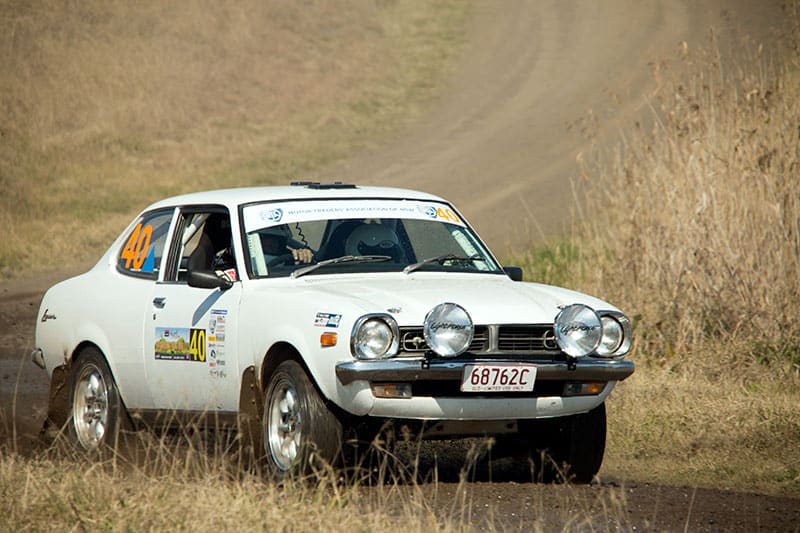 For the 2WD championship the winners were Clay Badenoch and Catriona Kelly (Toyota Celica RA40), followed by Craig Aggio and Megan Benson (Toyota Corolla KE30) and with Jesse Heitmann and Grant Burisch (Mazda RX7) screaming into third in their rotary.

For the Novice category of the 6 entries John Gibson and Peter Clydesdale (Mitsubshi Lancer) got to the end and won as all others struggled to finish.

The Accent Benchtops Working Dog Rally sponsor and competitor Glen Brinkman wanted the event to focus on rewarding volunteers for the event and supporting the youth. Significant encouragement prize money was awarded to the younger crews and every volunteer was gifted bulging goodie bags of substance as a token of their appreciation.

At the presentation the Gold Coast & Tweed Motorsporting Club were commended by the mayor, Bonalbo show society, volunteers and competitors for their impeccable event organisation. 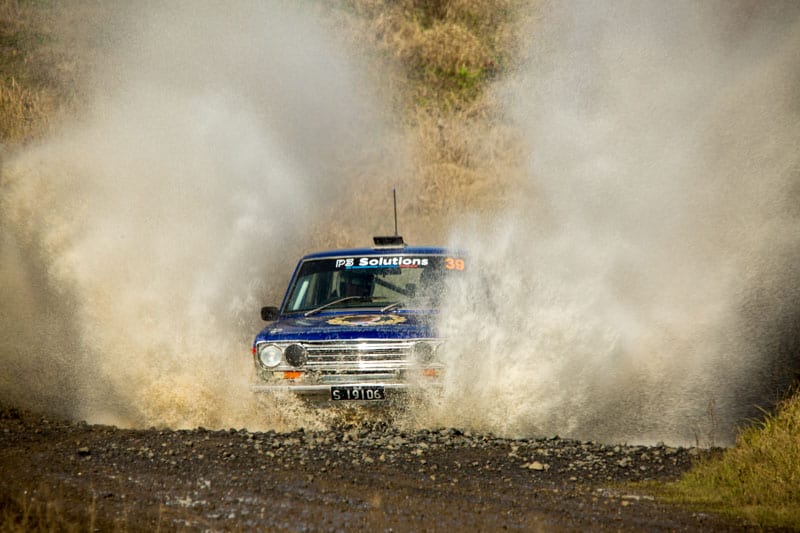 Shaun and Chris Cassidy make a splash in their Datsun 1600. Photo: Craig Hutchinson

Holding onto his lead of the P3 Solutions Qld Rally Drivers Championship is Brayden Wilson on 61 points, with Melinda Bergmann and Marius Swart, tied for second on 38 points and still in contention for the title.

For the P3 Solutions Qld Rally Co-Drivers Championship, leading is Alan Stean on 63 points, with second Blake Wilson on 58 points and Larisa Biggar on 36 points rounding out third.

The P3 Solutions Qld 2WD Championship is a battle of the classics with Craig Aggio and Megan Benson in the lead on 56 points, Clay Banednoch and Catriona Kelly second on 41 points and Keith Fackrell and Claire Bucinni in third on 29 points.

The next and final round of the P3 Solutions Qld Rally Championship will be September 14, The Inspriations Paint Capalaba Hinterland Rally at Imbil.