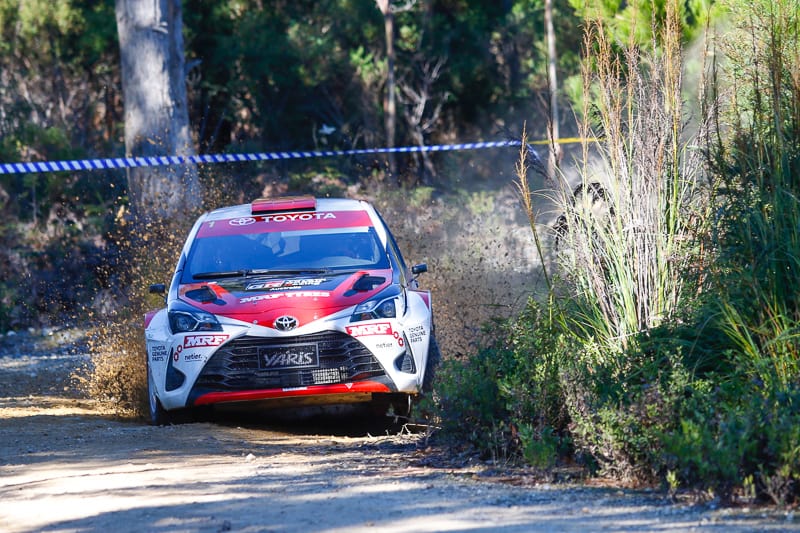 Harry Bates on all but one stage in Tasmania. Photo: Luke Whitten

Toyota GAZOO Racing Australia’s Harry Bates and co-driver John McCarthy put in a faultless performance over the weekend in Rally Tasmania to take the win after finishing fastest in 16 of 17 special stages.

The pair’s win in the Toyota Yaris AP4 is their third in a row in the Australian Rally Championship (ARC) and firmly cements them at the top of the driver’s and co-driver’s championship, a full 61 points clear of second placed Molly Taylor and Malcolm Read, who also took second place overall in Rally Tasmania.

Joining Bates and McCarthy on the podium for the weekend in third place was the second Toyota GAZOO Racing Australia (TGRA) pairing of Harry’s younger brother Lewis Bates and co-driver Anthony McLoughlin.

Speaking after the rally, Harry Bates said it was a very good result and was happy to bring the Yaris AP4 home in one piece.

“It was tough, and the conditions yesterday were very icy and it created a lot of challenges but we dealt with that and got through,” Harry said.

McCarthy was equally pleased saying: “It’s great to be able to reward the team and Toyota and everyone who has supported us with a really good result.”

After winning Friday night’s street circuit challenge in Launceston, Bates and McCarthy finished fastest in all ten stages on Saturday to take the lead at the end of heat 1 by 1 minute 35.7 seconds.

The pair again took the win in the first five of Sunday’s heat 2 stages with a lead of nearly one minute going into the last stage.

The younger Bates and McLoughlin had been battling it out with Taylor and Read for second and third positions all weekend and into the final stage, were in second place with a gap of 20.9 seconds to Taylor and Read. 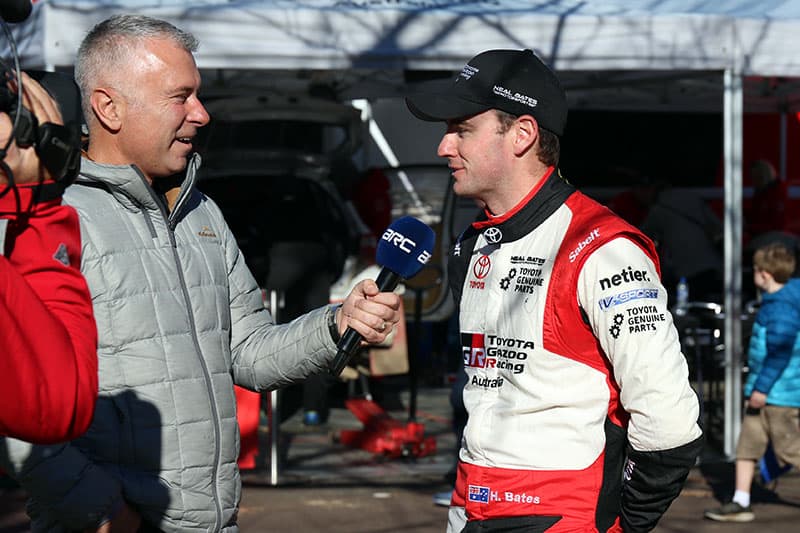 However, in the final 24km stage, Taylor and Read managed to take the win, finishing just 0.8 seconds ahead of the Yaris AP4 of Bates and McCarthy with the second Bates/McLoughlin car finishing third.

Bates and McCarthy were the clear winners of Rally Tasmania and while Taylor/Read and Bates/McLoughlin both finished the round with 64 points, Taylor/Read secured second place overall due to their final stage win.

“It’s great to stand on the podium with Harry and John and they did a great job all weekend so with a first and a third for Toyota GAZOO Racing Australia, we are really happy,” Lewis said.

Following the TGRA double podium in Tasmania, Lewis Bates and Anthony McLaughlin have now moved into third place on their respective championship leaderboards going into the fourth round in Ballarat, Victoria on August 24-25, an event that Harry Bates and John McCarthy have won for the past two years.

While the local TGRA rally team continues to build Toyota success on the motorsport map in Australia, Toyota GAZOO Racing is also expanding its international success.

The team’s GR Supra race car achieved a creditable third-place finish in the SP8T class at the weekend’s Nürburgring 24-hour race in Germany.

The previous weekend, Toyota GAZOO Racing achieved a one-two result in the famous Le Mans 24-hour race, cementing both the drivers’ and manufacturer’s titles in the 2018-19 World Endurance Championship.