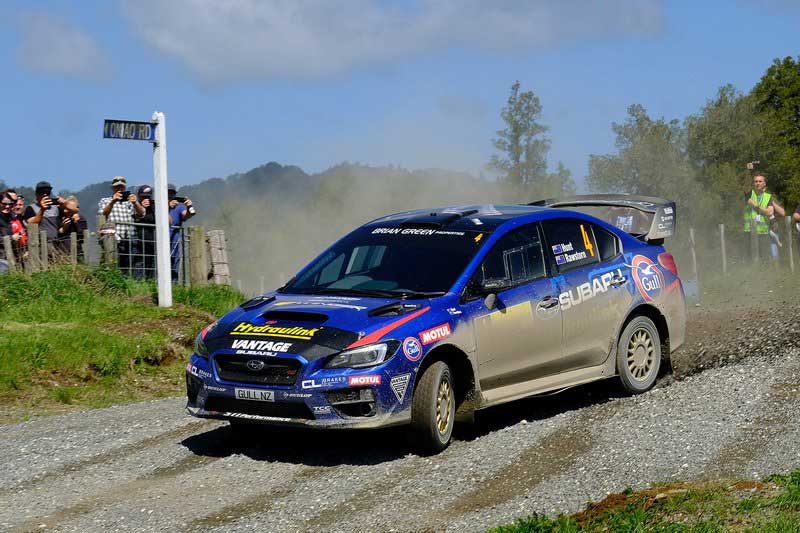 Ben Hunt and Tony Rawstorn on their way to winning the Rally of Waitomoi. Photo: Geoff Ridder

The long stages centered around the Ohura, Piopio and Waitomo areas allowed Hunt to showcase the speed and reliability of his Subaru WRX STi as he took hold of the lead after special stage three and never gave it up.

He and co-driver Tony Rawstorn were steadily dominant all day – winning two stages and placing in the top three, in three more.

“We put new springs in the Subaru last weekend and the handling of the car just felt fantastic. It ran without any issues all day and allowed us to get into a flowing rhythm with the pace notes.”

“This result is awesome for all the sponsors and the crew as they have put a lot of time and money into our campaign,” Hunt says.

Hunt and Rawstorn won by 22secs over Rotorua’s Sloan Cox and Sarah Coatsworth and with Hawkes Bay’s Max Bayley and Lisa Hudson home in third, it meant Hunt has moved up the championship ladder with only one round remaining.

Sitting on 99 points, he is 10 points shy of Aucklander Andrew Hawkeswood (109) and one point ahead of fellow Subaru driver Matt Summerfield (98), of Rangiora, which stands Subaru in good stead for the Manufacturer’s Championship.

Subaru of New Zealand Managing Director Wallis Dumper says this victory is a great reward for Hunt’s persistence over the past two years.

“It’s not easy to be the national champion like he was in 2015 then take a brand new standard production Subaru WRX STi and develop it into a championship-winning car, while going up against all the purpose-built AP4 cars.

“We are truly pleased for him and Tony, plus the whole team, who have worked so diligently toward taking basically the same WRX STi you can buy from a Subaru dealer in New Zealand to the front of the New Zealand Rally Championship,” Mr Dumper says.