Curiosity continues as to why it took so long before Therry Neuville’s stay at Hyundai was confirmed.

Thierry Neuville is remaining at Hyundai in 2017.The Belgium website http://m.dhnet.be/ quoted Thierry as saying: "we have long known that there is no place at VW until 2019, and I was aware that Citroën was no longer an option for weeks already".

They suggested: “the truth is that they will stay not by love or real conviction, but because they have not found better elsewhere”.

Worrying news for British motorsport fans. The two leading sporting publications, Autosport and Motorsport News, have been sold to the American company which runs www.motorsport.com.

The two British magazines have been published by dedicated and professional enthusiasts for over half a century.

Jean-Marie Cuoq’s win on the Terre des Cardabelles, after the early retirement of Julien Maurin, enabled him to clinch his eighth French gravel championship title.

A sad spectator accident curtailed the Rally Legend event in San Marino and caused the two final stages to be cancelled.

The Myth category was won by “Lucky” and Fabrizia Pons in a Lancia Delta Integrale 16V, the WRC category by Luca Pedersoli’s Citroen C4 WRC, and the Historic section by Salvatore Riolo’s Aufi Quattro A2. 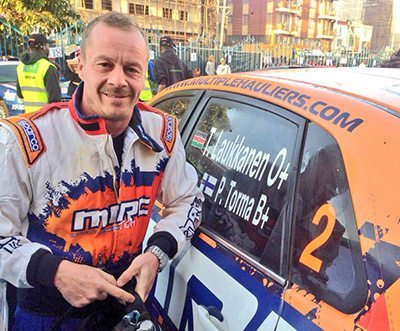 Tapio Laukkanen took his fourth victory in the Kenyan Rally Championship.This year’s remarkable Trans Chaco Rally in Paraguay led to Mitsubishis taking the top eight places, led by the Evo X of Galeano, with 12 Evos finishing in the top 13.

Conditions, made worse bad by recent rains, were too tough for the country’s R5 cars, none of which finished.   Other cars winning their class on this very hard event included a Honda Civic Type R, a Changan Eado XT and a VW Go.

Finnish driver Tapio Laukkanen scored his fourth victory this year in the Kenyan Rally Championship when he won this weekend at Eldoret.

A Toyota Yaris is under preparation for competition in the 2017 New Zealand Rally Championship under the regional AP4 rules.

After the recent Rallycross in Latvia, Petter Solberg’s 15 year old son Oliver, already a cross kart champion in Norway, was given a test in an SRT team Peugeot 208 R2 rally car.

“Dream, SRT.   Thanks for giving me the opportunity to let me test this car, the best day in my life.  A dream come true,” he wrote on Facebook.