Hyundai’s WRC driver Hayden Paddon made an expected entry on the French championship Aveyron Rouergue Rally in an i20 R5, but was delayed on the first day firstly with a costly off-road excursion and then a puncture.

Skoda driver Manvir Baryan won the Pearl of Africa Uganda Rally (30th June to 1st July), the fourth round of the FIA African Rally Championship and the first victory for a Skoda in this series.

Main rival Jaspreet Singh Chatthe retired. He is still undecided as to whether he will compete in the remaining three rounds of the African Rally Championship, which take place in Tanzania, Rwanda and Zambia.

Baryan said: “My main focus is winning the Kenyan title and I am currently second in the championship standings there.” 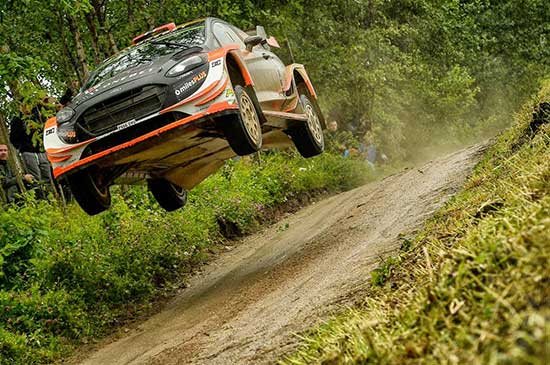 Mads Ostberg won the long jump award at the Rally of Poland.Despite finishing only seventh in Poland, it was win-win for Mads Ostberg’s One Bet Jipocar team.

His gaming company sponsor OneBet launched a sideline, judging who would make the longest jump of the event.  Almost predictably, the winner was Mads Ostberg whose Fiesta WRC leaped 45 metres.

Meanwhile, Craig Breen poured his heart out on Social Media after his disappointing run.

“Last weekend was most definitely a weekend to forget.   I struggled and struggled and felt a bit lost in this world I love so much.

“However now it's time to reset, Rally Finland is next, and I have so many fantastic memories from last year.  Yes, this is a challenge, but they've not stopped me before.

The event counted for the FIA Nacam series in which the highest placed finisher was Mexican Ricardo Trevino, who this time changed his Mitsubishi for a Citroen DS3 R5.

Among the top names absent from the forthcoming WRC Neste Rally Finland will be the WRC2 series leader, Pontus Tidemand, whose current points total of 118 make him the benchmark for his rivals.

Closest in Ole Christian Veiby on 68 points, but because he has entered the Finnish event as a championship contender, this makes him unable to accumulate enough points by the end of the year to beat Pontus in the drivers’ championship.

The main threat to Tidemand is now Teemu Suninen who, in theory, can become champion, all else being equal …

The points permutations are extremely complicated, witness that Suninen’s entry in Finland in a World Rally Car and not as a WRC2 driver perversely keeps open his WRC2 title plan.  Weird, isn’t it?

The Rallye de Ferrol, fifth round of the Spanish asphalt championship, held in the Galicia region, was won by Ivan Ares in a Hyundai i20 R5, beating the Citroen DS3 R5 of Victor Senra.  Cristian Garcia retired, off the road.

He is to replace Citroen driver Jose Pedro Fontes, who is recovering after being injured during the Rally of Portugal.