The pre-Ypres test Woodstoxx Motul Rally van Wervik was won by the Hyundai i20 R5 of Guillaume Dilley.

Chewon Lim in action on the Wervik Rally. (Photo: Hyundai)It was a useful test for Hyundai’s Korean trainee driver, Chewon Lim, whose similar i20 R5 suffered unwelcome problems when the engine frequently cut out, as if changing gear, without warning. He lost more than 10 minutes to the overall leaders over the first three stages.

The rally also served to give confidence for Lim after his recent big accident of the TER series Transilvania Rally in Romania.

Ypres Rally represents the end of the first year in competition for the i20 R5.

Manus Kelly won the Donegal International Rally for the second year running in a Subaru Impreza WRC, while the top scoring TROA Championship driver, Alastair Fisher, was second in his Ford Fiesta R5.

Donagh (no relation) Kelly had been fighting a close battle with Manus, but went off on the penultimate stage. The three day Donegal Rally is considered one of the most popular events in Ireland. 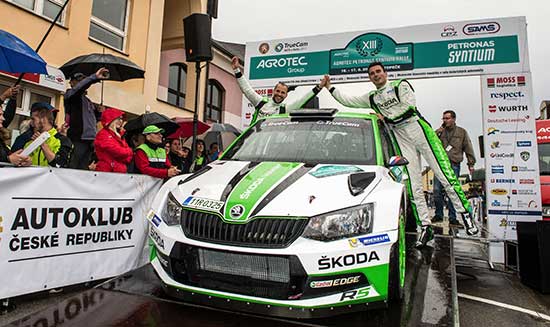 For the second rally running, Miroslav Jakes finished third in his Fiesta R5.

The weather was mixed and there were many punctures, one for Kopecky, allowing Skoda teammate Pontus Tidemand to take the lead for a couple of stages.

Best ERC2 driver was Demosthenous, ERC3 was Ozdemir, MERC2 was Galatariotis and ERC3 was Asen Aref.