Tom Wilde has confirmed he will contest the 2014 Asia Pacific Rally Championship (APRC). The 26 year old WA driver will compete in the same Verandah Apartments team Renault Clio that he successfully drove into second place in the Australian Rally Championship (ARC) last year.

Wilde will again pair-up with his 2013 Co-driver Bill Hayes.

Hayes was the 2011 APRC Champion Co-driver alongside Alister McRae, his experience in the Asia Pacific Championship will be a huge benefit to the team. 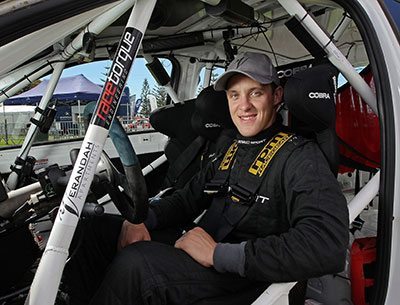 Tom Wilde will drive his Renault Clio in the Asia-Pacific Rally Championship.Team owner, Nick Clements of Verandah Apartments in Perth, is proud to be playing a part in this step of Wilde's career and said: “Competing in the APRC was always in the back of our mind.”

“We weighed up our options for 2014 and found the time was right. We had a brilliant year in the ARC last year and I think the stiff level of competition would have been the perfect preparation for what will be a very exciting year for us.”

Wilde will team up and share associated costs with ex Honda driver Mark Pedder, who will drive a Mitsubishi Evo X. The team will be managed by experienced Race Engineer, Dave McShane.

McShane said: "Tom has proven himself to be a very talented young driver who has been producing fantastic results and reliable finishes.”

“The very technical conditions will suit his driving style and I think he could surprise some of the 4WD competitors.”

While Wilde plans to compete in all six rounds of the 2014 APRC, Clements said the team would need to secure additional funding for the last three.

Wilde may also compete at selected ARC events this year, including his home town event, the Quit Forest Rally around Nannup on April 4 to 6.

He said the event would be the perfect practice for the first round of the APRC, the International Rally of Whangarei in New Zealand the following weekend.