The scare occurred when British rally competitors Higgins and Drew opened up a 1:34.5 minute lead over rival teammates Travis Pastrana and Chrissie Beavis in their 2015 Subaru WRX STI heading into the last leg of the New England Forest Rally. Higgins struck a rock on Stage 10 causing major suspension damage. At the end of the stage Higgins was in the process of repairing the damage when a fire flared and he received a face full of fire extinguisher spray.

Australian co-driver, Rhianon Gelsomino, together with driver Nick Roberts, had a disappointing event. They had an off-road excursion on stage eight, then re-joined the rally three stages later, only to have a mechanical failure end their rally.

Higgins' lead over Pastrana was cut to 31.1 seconds. Following service Higgins pushed through the last three stages, despite the discomfort, to take his fourth consecutive Rally America title, and sixth U.S. National Championship overall victory in an outstanding career to date.

"We still had a reasonable lead when we left service," said Higgins, "The rally isn't over until it's over. We went out to win the last three stages to win the rally, and more importantly to win the Championship. America has been very kind to me."

"The team has been really strong and we haven't had the luck to win until the last two events," stated Van Way, "We need the points and the Super Production Championship is looking pretty good for us."

Nick Roberts and Rhianon Gelsomino had led the event until Van Way took over the class lead on Stage 6. On Stage 8, Roberts went to wide into a corner and got stuck. The team was not able to extract themselves and unfortunately was forced to retire. 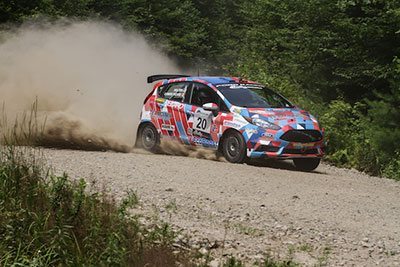 "We are totally thrilled, it's just amazing to win this event and lock up the 2WD Championship with two events remaining," exclaimed Comrie-Picard, "It took us a few years to get here. But the Ford Fiesta ST has been amazing and Ole (Holter) has been terrific in the co-driver's seat."

Johnson and Wimpey got as close as 5.7 seconds to ACP on Stage 5 until transmission problems surfaced and forced the team to replace it during service. Johnson is pleased to settle with a second place 2WD finish considering the team missed the last two Rally America rounds. Troy and Jeremy Miller took third in class, and Troy Miller currently continue to lead the Rookie of the Year standings over Mickey Moran.

Bethel, ME hometown favorite, Chris Duplessis with British co-driver Phil Hill, took the B-SPEC Class win in a Ford Fiesta over Honda Performance Development's James Robinson and Brian Penza and their Honda Fit. But it is James Robinson's finish at the New England Forest Rally that mathematically secures his second B-SPEC National Championship.