Ott Tänak has made it six winners from seven rounds of this season’s FIA European Rally Championship with an emphatic victory on auto24 Rally Estonia – five years after his legendary team boss Markko Märtin won the high-speed gravel event.

With his rapid progress followed every step of the way by thousands of enthusiastic fans, Tänak led from the start in his M-M Motorsport Ford Fiesta R5, which he shared with co-driver and fellow Estonian Raigo Mölder. The 26-year-old Tänak was fastest on 10 of the 14 gravel stages and was also quickest on the auto24-Tartu City street stage in front of 30,000 spectators.

But it wasn’t entirely straightforward for Tänak who had to overcome a few minor technical issues, including a fault pop-off valve, to triumph in the stunning Estonian countryside ahead of rapid Russian ERC Production Car Cup winner Alexey Lukyanuk and Timmu Kõrge, who made it two Estonian M-M drivers on the podium. Lukyanuk’s heroic performance earned him the prestigious Colin McRae ERC Flat Out Trophy.

“We managed to do a good pace all the rally,” said Tänak, who is the new ERC Gravel Master. “Somehow we got a good lead after Friday so today was about trying to enjoy and stay concentrated. The organisers have done a perfect job although it’s not so easy to do a big event like this in a small place like Estonia. But they made a big event with lots of spectators.”

Estonian Kruuda, 21, had been a favourite for a podium prior to the start but a power issue dropped him out of contention on Friday’s opening leg. Like Lappi, Wiegand struggled to match the pace of the turbo runners in his normally aspirated machine but still scored important ERC points.

Roland Murakas finished eighth, Frenchman Sébastien Chardonnet ninth in a Citroën DS3 R5, while Kristian Sohlberg completed the top 10. Chardonnet and Sohlberg were using the event to prepare for the world championship round in Finland later this month. Czech Jaromír Tarabus, who ran first on the road on both legs, finished 11th on his return to ERC action.

Siim Plangi, who was making his debut in a Peugeot 208T16, started day two 5.6s behind Kruuda but a broken clutch and puncture in the afternoon dropped him back before he rolled into retirement on the final stage. Raul Jeets and co-driver Andrus Toom also crashed out in the closing stages, going off the road on the penultimate run. After being attended to at the scene by medical crews they were taken to hospital in Tartu for further checks. Robert Consani retired with engine failure on Friday’s penultimate stage. 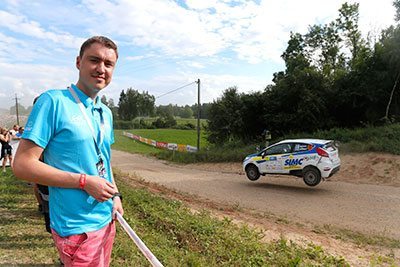 Estonian Prime Minister enjoys the carnival atmosphere on ERC round
The Prime Minister of Estonia, Taavi Rõivas (pictured right), joined thousands of fans when he visited two stages of auto24 Rally Estonia on Friday along with his family. Prime Minister Rõivas spent time with François Ribeiro, Motorsport Director of ERC Promoter Eurosport Events, and ERC Co-ordinator Jean-Baptiste Ley. Afterwards he commented that it had been a “very enjoyable experience”.

ERC Production Car Cup: Lukyanuk shines
Alexey Lukyanuk fought back from a dramatic spin on stage two to beat Rainer Aus to the ERC Production Car Cup spoils. The perennially underfunded Russian was fastest in class on all but two occasions in his Mitsubishi Lancer Evolution X. Behind Aus, Roland Muakas finished third with Martynas Samuitis fourth and championship leader Vitaliy Pushkar fifth. Kaspar Koitla had been expected to challenge for class success but a heavy landing on Friday afternoon left his Mitsubishi Lancer with a damaged radiator. Axle failure forced Egon Kaur’s exit while a technical fault also accounted for Jānis Vorobjovs.

ERC 2WD Championship: Pärn on top at home
Sander Pärn overcame illness to claim ERC 2WD glory on home soil after early leader Eli Evans dropped back when he twice went off the road on day one. The Australian champion, who was fastest on two stages, eventually retired after damaging the radiator on his Honda Civic Type R following a heavy landing on Saturday afternoon. Quentin Giordano was second in class overnight after bagging back-to-back stage wins on Friday evening. However, he retired when he rolled on stage 11. Simone Tempestini dropped out of a podium place with an engine issue but there were no such problems for ERC Junior regular Fabio Andfoli, who finished a fine second, one place ahead of defending champion Zoltán Bessenyey. The Honda driver’s third place puts him back into the title lead. Max Vatanen took fourth.

ERC Ladies’ Trophy: Frustration for birthday girl Tushkanova
Glamour model Inessa Tushkanova, who celebrated her 27th birthday on the opening day of the event, missed a golden opportunity to close the gap to ERC Ladies’ Trophy leader Ekaterina Stratieva, who wasn’t competing in Estonia, when she was prevented from starting after it was discovered that the roll cage in her Mitsubishi Lancer didn’t conform to the regulations. However, Tushkanova is working on securing the budget to contest Barum Czech Rally Zlín and two further ERC rounds.