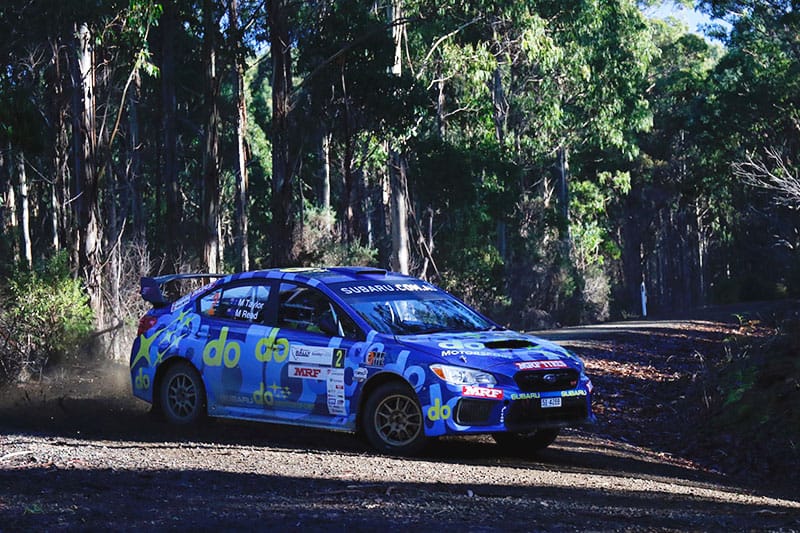 An icy start to Subaru Rally Tasmania has tested the best in Heat 1 of the third round of the 2019 CAMS Australian Rally Championship.

Subaru do Motorsport team finished the heat in second place overall after negative temperatures literally proved a spin-out for some competitors this morning.

Following last night’s Inveresk Super Special Stage, just minutes from the heart of Launceston – the rally’s shortest at just 0.80 of a kilometre – the Subaru do pair remained a model of consistency, achieving five second places across the five morning stages.

That was despite a spin on SS2 – literally an icy wake-up call for Taylor and Read as strong sunlight and shadows played optical tricks on competitors with still cold tyres, eager to evaluate whether water or ice was on their approaches.

After midday service, the Subaru do confidence continued, with second on SS7, the repeat of the morning Mount Barrow stage.

With a thaw in the air, Taylor and Read were determined to consolidate Heat 1 honours, with one eye on also strengthening their second-place Championship standing.

The second run through the long Mount Scott Stage perhaps gave the best indication of Subaru do improvement – more than 20 seconds better than their morning run on the Heat’s longest stage (19.04 km).

A fourth, third and second placing across the balance of the stages was sufficient to ensure their overall second place.

Molly said: “It was a tough morning. The conditions were pretty crazy with really good grip on some sections and sheet ice on others, which wasn’t always obvious.

“Today has proved the benefit of pre-event testing and we really began to see that as the morning went on, giving us the confidence to take it up to the next level of the car’s and our ability.

“The spin on this morning’s first stage cost us five or six seconds and at first it was really hard to get heat into the rear tyres with the surface being so cold, but we certainly built momentum throughout the day, so it’s been a productive, if chilly, exercise.

“Obviously we’re keen to do well on the home turf of Craig Brooks and the Orange Motorsport team, and so far we’re on track.”

Tomorrow’s Heat 2 covers an additional six competitive stages across 97.6 competitive kilometres and concludes with a ceremonial finish at Inveresk at 4.30pm.

COMMENT: Subaru vs Subaru. Taylor vs Evans. Orange vs Blue.