News from the Autosport International show

Among the rallying announcements from the opening day at the Autosport International show at Birmingham, the promoters of the national MSA British Rally Championship disclosed that Prestone, an American antifreeze and coolant brand, will be the title partner of the 2017 seven round series.

This was a timely move, being confirmed on the day when the worst weather conditions for a year swept across the country!

The series now starts with the Border Counties Rally in South Scotland held on 17/18  March.

Meanwhile, M-Sport launched their Fiesta R5 Evo 2 which is due to make its competition debut later in the year.

Main changes in the Evo 2 are engine improvements with more power and torque through changes to the cylinder head, exhaust manifold and valve train, which provide performance gains throughout the rev range. 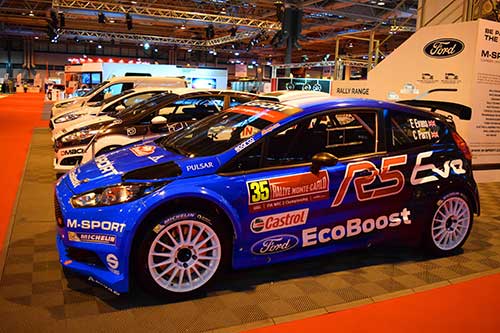 M-Sport's new Fiesta R5 Evo on display in the UK.The launch of the model was combined with the announcement that M-Sport has now built their 200th Fiesta R5, double the number of their rival Skoda Fabia R5.

The 2017 model Fiesta WRC was also displayed in Red Bull livery which will be used by Ogier, while Tanak’s car will be blue and white, and Evans’ car will be in DMack colours.

The cars to be driven this year by Sebastien Ogier and Ott Tanak are to bear cherished registration plates WRT1 and WRT2 on rallies.

Following its recent reluctant withdrawal from the European, Irish and British rally calendars in 2017, announced at the show was an innovative two-day event to be run 7/8 April, in which 30 established R5  drivers will be invited to compete.

This will be based at Ballymena and will serve to maintain the momentum which the recent Circuit of Ireland events created.