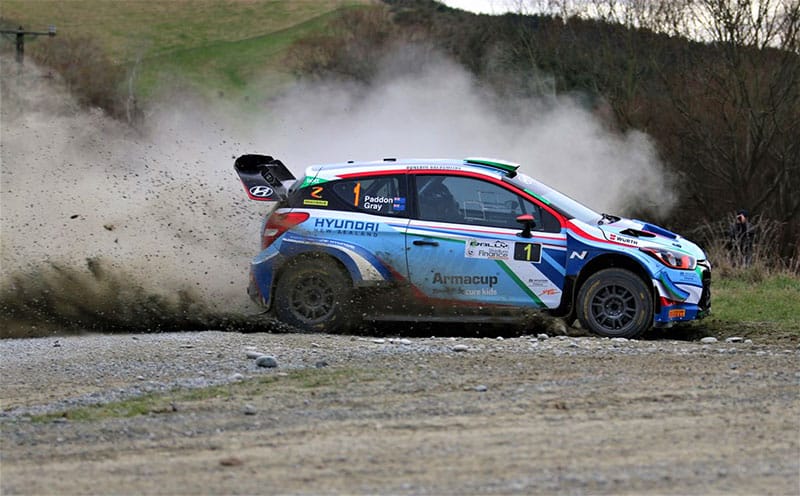 Hyundai rally driver Hayden Paddon paid credit to the Paddon Rallysport crew after he and co-driver Samantha Gray dominated the Rally of South Canterbury with 12 wins on 12 special stages.

The Hyundai i20 AP4 ran virtually faultlessly throughout the one-day rally on Saturday 22 June, enabling the pair to power to an outright rally win with a margin of six minutes, 54.4 seconds from second-placed Ben Hunt.

Paddon was entered in the all-comers category, having opted not to enter the New Zealand Rally Championship this year, leaving Hunt to take maximum NZRC points.

Paddon achieved his pre-event goal of upping the pace he showed last year when he won by a margin of nearly five minutes with John Kennard in the co-driver’s seat.

The Hyundai i20 AP4, not being restricted by championship regulations, had a little extra power and different gear ratios this year, helping Paddon to push harder and secure a nearly seven-minute winning margin. Along the way, Paddon secured new stage records on all 12 special stages.

“It was a great day,” says Paddon of his home rally in Timaru. “We really enjoyed it. The stages were in amazing condition and the car was great, thanks to the team’s preparation.”

Paddon says the forestry stages provide a contrast to the high-speed rural stages, and that the South Canterbury Car Club has the strong makings of an iconic South Island rally with this event.

“It was a trickier start this morning, in the dark in the forest, but that contrasts well with the high-speed stages to create a great event. With the work done on the i20 AP4 before the event, we didn’t have the top end speed we thought we might, but there was plenty of speed out of corners and I enjoyed those higher speeds more.

“I think this event could become an iconic South Island rally something like the Otago Rally. It’s got all the components and now needs some time.”

As a one-day rally, the South Canterbury event offered competitors just one day of reconnaissance and one pass through each of the 12 special stages. “Samantha went well; the one-pass recce is harder for co-drivers, trying to get all the linking of notes correct, but she did well. It’s good to have contested both two-pass and one-pass rallies together.”

Next up for Paddon is his debut in the Global Rallycross Europe series which kicks off next weekend in Essay, France. He has six rallycross events between June and October. Meanwhile the Paddon Rallysport crew will re-fit the Hyundai i20 into its hillclimb specifications in preparation for the Ashley Forest Rallysprint in September.

He’ll also run the car in this specification for the Waimate 50 street race which celebrates its 60th year over the weekend of 26-27 October.