A deeper dive into the results from the Rally Bay of Plenty on Sunday reveals a story of fierce competition and mixed fortunes among the quick two-wheel-drive crews.

A deeper dive into the results from the Rally Bay of Plenty on Sunday reveals a story of fierce competition and mixed fortunes among the quick two-wheel-drive crews. Nine stages saw five different drivers atop the 2WD time sheets. In the end success was claimed by teenager Jackson Clendon, who didn’t win a stage, but delivered front-running pace throughout the rally. The choice of roads for the Whakatane-based event had the leading drivers of four-wheel-drive cars suggesting the combination of tight sections and faster roads showed no favour to either the nimble R5 and AP4 machines or the older style – and faster in a straight-line – Lancer and Impreza production cars. The same could be said for the balance of front-drive and rear-drive competition. The rally reached its half-way point after five stages with four different 2WD stage winners. Justin Glavish was fast out of the blocks in his 1300cc EP71 Starlet with an impressive 10th fastest overall in the opening stage at Stanley Road. He shared the stage three win with Shane Murland (Escort RS1800) and another win in stage five (Herepuru Road) consolidated his 2WD category lead. 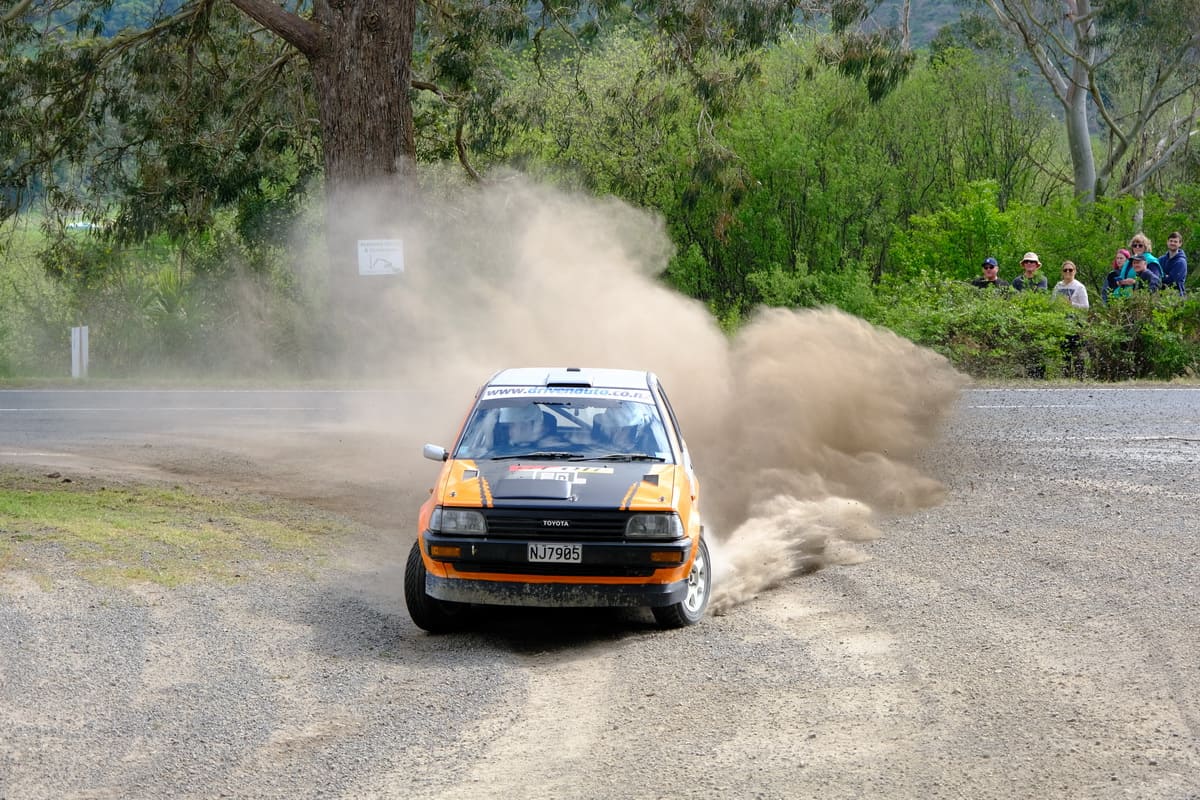 Bryn Jones had won the second stage (Manawahe Road) in his Ford Fiesta ST, just ahead of Glavish. The faster sections of SS4 (Campbell Road) favoured the more powerful rear-drive cars and Ian Wood set the pace in his turbocharged KE70 Corolla, but he retired in the next stage. The other early casualties were top-seeded 2WD contender Dave Strong (Honda Civic Type-R) who was sidelined with a broken driveshaft in stage three, and Anthony Te Rito in his earlier Honda Civic, who was running fourth before retiring in stage five. Glavish checked into the mid-rally service at Matata with a 28.3secs advantage over Jackson Clendon (Ford Fiesta ST). Charlie Evans (Honda Civic) was running in third position a further 20.1s back, and just ahead of a family-feuding Anthony Jones (Ford Escort) and Bryn Jones. 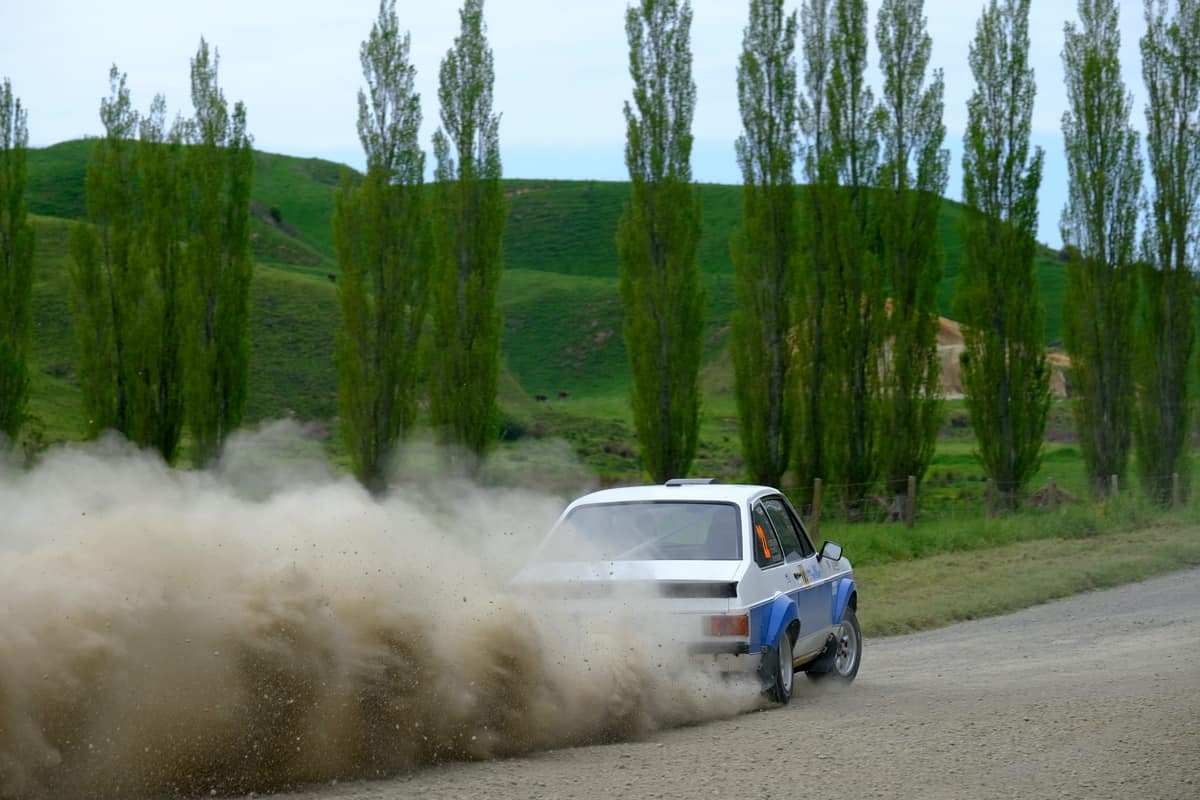 Shane Murland was as exciting as ever in his Escort RS1800. Photo: Geoff Ridder

But the rally ended for Glavish in stage six with a front suspension breakage that moved Clendon into the lead. A resurgent Murland won the next three stages, clawing back some of the two-and-a-half minutes lost in stage four when he’d been unable to avoid a post that had been dragged onto the road – resulting in a mid-stage tyre change. The list of stage winners grew again in the final stage (Stanley Road reverse) when Jordan Grant set the pace in his Suzuki Swift. 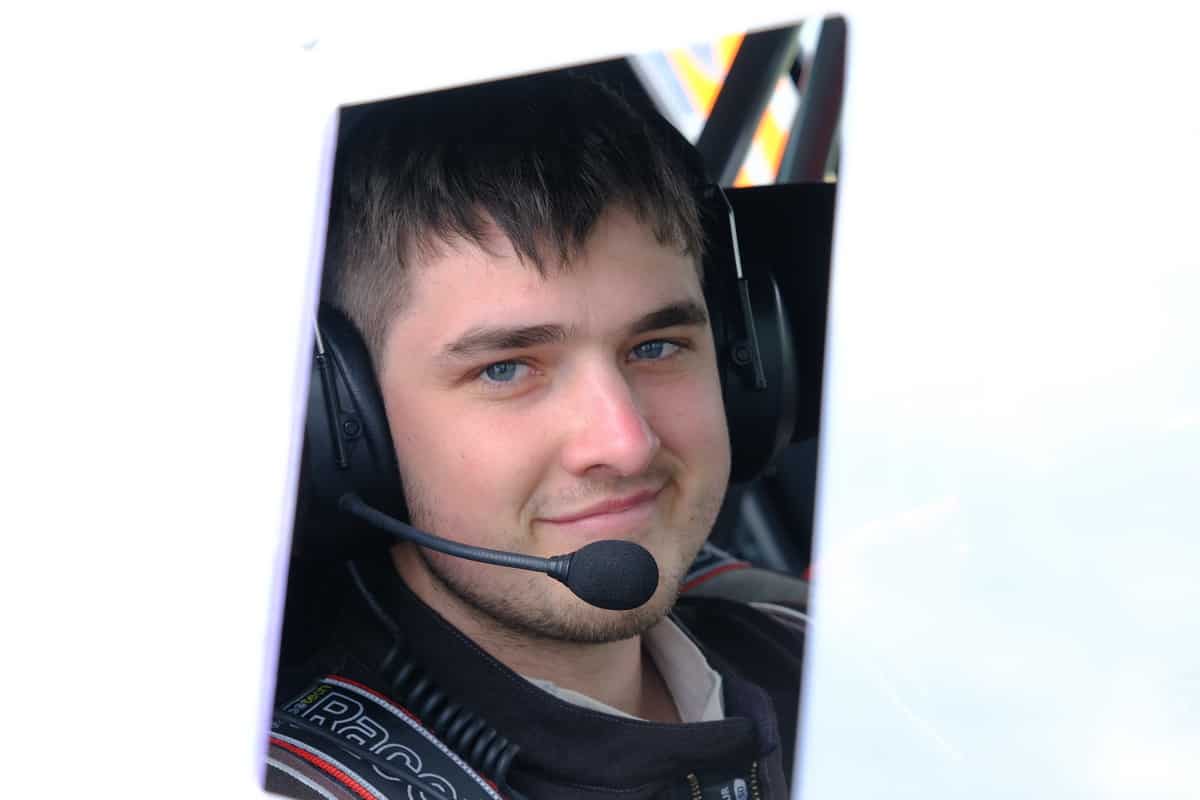 Jordan Grant was a stage winner in his Suzuki Swift. Photo: Geoff Ridder

Grant had knocked down a section of fencing in the opening stage of the rally and decided on a more measured approach to build his pace through the day. Jackson Clendon had plenty to celebrate on his rally debut. An impressive 14th overall, a 1601-2000cc class win, overall 2WD honours and a podium (behind two 4WD crews) in the Novice category was a solid day’s work for the 17-year-old. With Katrina Renshaw calling the pace notes, the Masterton driver looked quick and assured on the stages, reporting just one moment when he overshot an early junction in stage four. Charlie Evans and Sue O’Neill finished 32.2secs behind in a Honda Civic, with the six-cylinder Toyota 86 of Brent Taylor and Chris Ramsay only 16.5secs further back. Jordan Grant and Glen Goldring were 8.1s back and still within a minute of the 2WD winner. Providing further diversity to the 2WD contest, the Nissan Bluebird Turbo of Karl Robinson and Chris MacIver finished fifth ahead of the Fiesta of Bryn Jones and Chris Davison, and the BMW 328i of McCrae Sloper and David Christie. 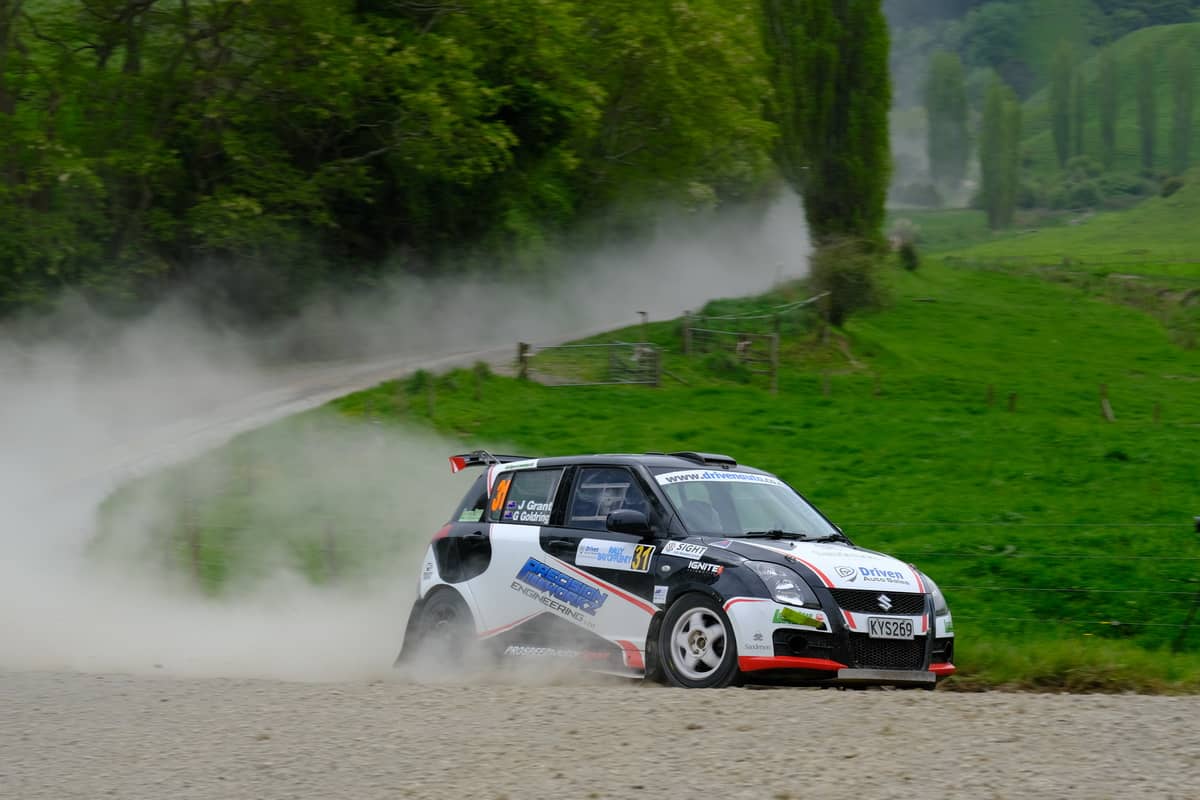 Jordan Grant in action in his Suzuki. Photo: Geoff Ridder 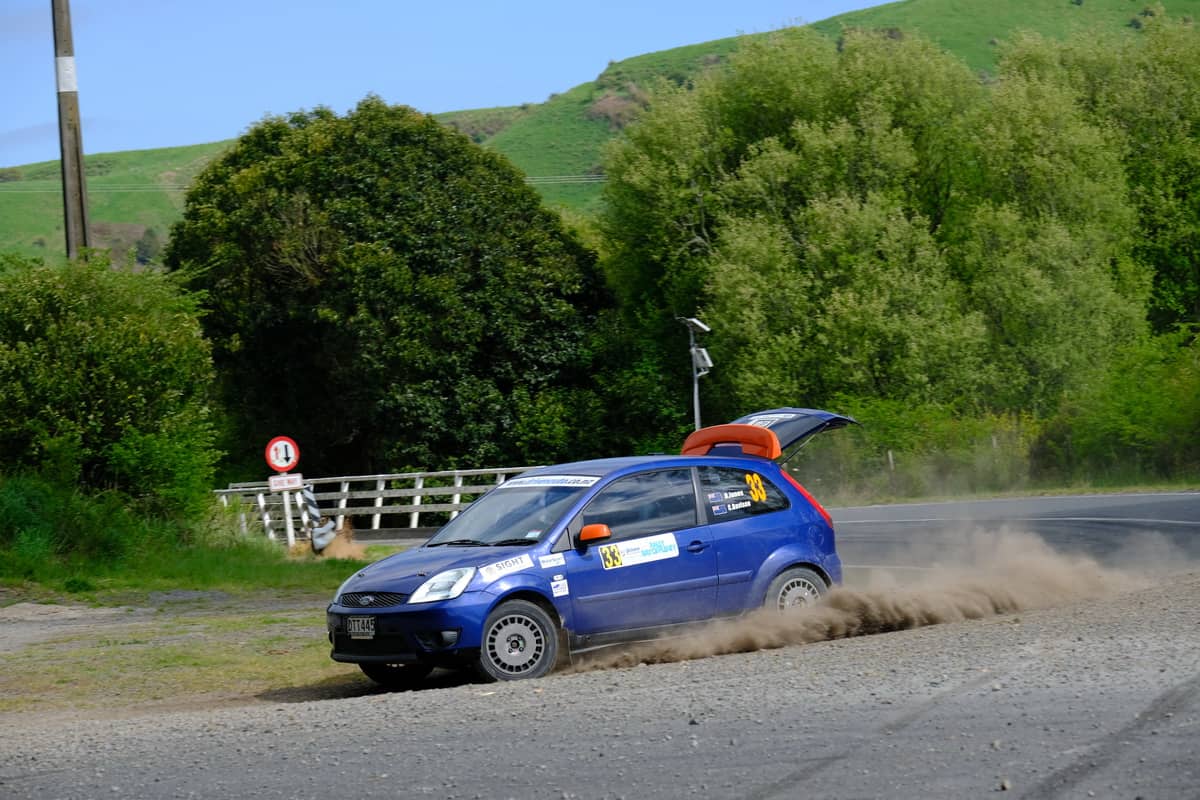 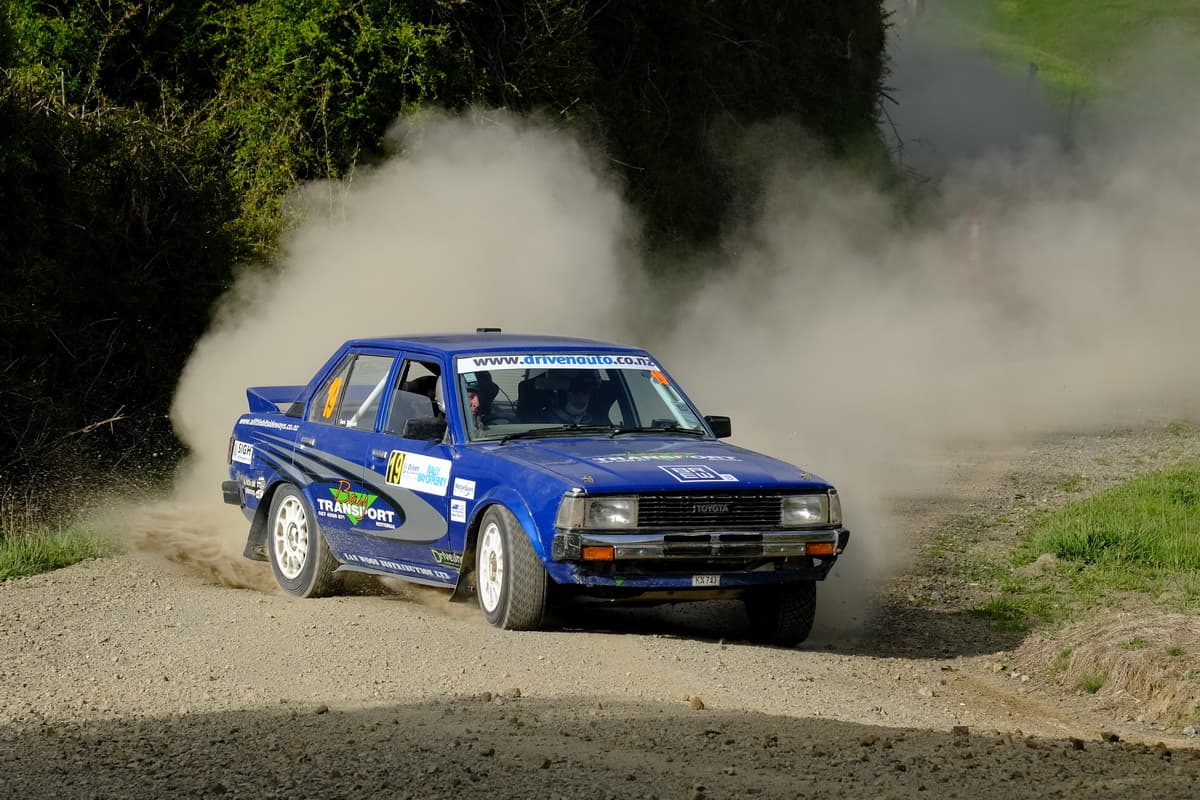